Ruby Maher the youngest member of the band, has excelled in her career already at the young age of 12. From starring on Will.I.Am’s team on The Voice UK Kids to numerous TV appearances. She is a ray of sunshine, and with her big smile she steals the hearts of people anywhere she goes.  As Will.I.Am said “She has awesome energy” and “Is the type of singer that can sing any type of song beautifully”. Ruby is the voice of this generation, speaking to our hearts as she sings this lullaby to help save the world. 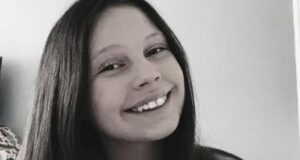 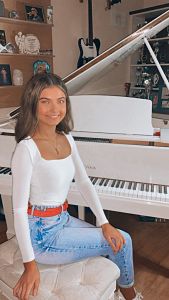 Robyn Maher is a 17-year-old student that has an evident passion for music and performing arts. Robyn started performing at the tender age of 3 and has adored it ever since. She has performed on stages all across Ireland and the UK, including theatres such as The Helix, The Olympia, The Curve Theatre in Leicester.

Robyn has also made numerous TV appearances including, “Junior Eurovision”, “Realta agus Gaolta” and the film “Dating Amber”. Robyn also travelled to California, LA in 2018 to compete in the World Championships of Performing Arts, competing in the categories of dance, singing, modelling and instrumental (piano), she proudly arrived back to Ireland with 14 World Champion medals and 2 World Titles.

Robyn lives to sing, dance and act but one of her first loves has been her passion for playing the piano since the age of 3. Robyn loves performing with her sisters and her dad, cherishing these special memories that she will have forever.

Stacy Maher is 19 years old who has been singing and dancing for as long as she can remember. She is currently in her second year of training at Laine Theatre Arts where she will receive a diploma in Dance and Musical theatre. Stacy also trained at Phoenix Performing Arts College, with whom she got to perform some of her dream roles, including Lauren in Kinky Boots, Carrie in Carousel and Eponine in Les misérables at the Helix Theatre for her graduation showcase! She has competed in Los Angeles in 2018 at the World Championships of Performing Arts, coming home with many gold and silver medals for her country.

Stacy has also performed across the UK and Ireland, most notably, being recognised by West End and Broadway Stars and receiving “star of the show” for playing the role of Ms Hannigan in Annie at The Curve Theatre, Leicester. She is no stranger to the stage and has played many roles including Tiffany in Back to the 80’s with Stage Academy and Patty in Grease with SGPA. Stacy has also appeared in film and TV- Most recently in Amazons original movie “dating amber” and RTE’s documentary of Mairin deBurca- A Loner’s Instinct were she plays young Mairin. The Maher’s have appeared on Ireland’s most talented family “Reolta agus Gaolta” were Stacy and her family won the first heat and made it all the way to the semi-finals. 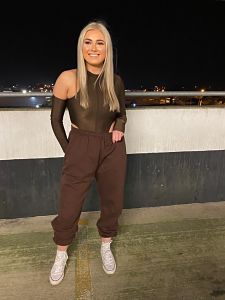 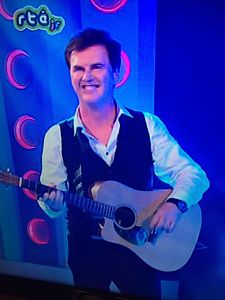 The band leader Dave Maher is a legend in the Irish music industry from winning opportunity knocks with  24 million people voting when he was the lead singer of the band and just like his youngest daughter  Ruby is now with The Mahers. He won this huge show with the very first version of the Mahers performing with his brothers and sister and then on to his many hit singles and numerous TV appearances and tours of the UK, Europe and North America with his band Dave Maher and the Rockets. This is all documented in the amazing new book just released about his life ''Stars and Troubadours ''  by Harry O'Reilly. 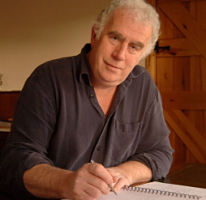 'Lullaby for the World'

Brendan Graham is one of Ireland’s most successful songwriters, having written two winning Eurovision entries for Ireland (Rock N Roll Kids and The Voice) as well as one of the most successful songs in the history of popular music, You Raise Me Up, which to date has been recorded over hundreds of times in numerous languages.

Rick was a pioneer in bringing classical and classical crossover to the mainstream. In 1991, his World in Union project and TV theme song was the first to take an opera singer, Dame Kiri Te Kanawa, to the top of the UK singles chart – a feat not even achieved by Luciano Pavarotti.

Rick has been involved in many great careers over the years namely  The 3 Tenors solo crossover albums with Jose Carreras’s ‘Passion’,  Charlotte Church, David Garrett & ‘The People’s Tenor’, Russell Watson

As a devoted Sheffield Wednesday fan, not surprisingly, Rick’s business and life philosophy is ‘the only limit to what is achievable is what is imaginable’!

We use cookies on our website to give you the most relevant experience by remembering your preferences and repeat visits. By clicking “Accept”, you consent to the use of ALL the cookies.
Cookie settingsACCEPT
Manage consent

This website uses cookies to improve your experience while you navigate through the website. Out of these, the cookies that are categorized as necessary are stored on your browser as they are essential for the working of basic functionalities of the website. We also use third-party cookies that help us analyze and understand how you use this website. These cookies will be stored in your browser only with your consent. You also have the option to opt-out of these cookies. But opting out of some of these cookies may affect your browsing experience.
Necessary Always Enabled

Performance cookies are used to understand and analyze the key performance indexes of the website which helps in delivering a better user experience for the visitors.

Analytical cookies are used to understand how visitors interact with the website. These cookies help provide information on metrics the number of visitors, bounce rate, traffic source, etc.

Advertisement cookies are used to provide visitors with relevant ads and marketing campaigns. These cookies track visitors across websites and collect information to provide customized ads.

Other uncategorized cookies are those that are being analyzed and have not been classified into a category as yet.